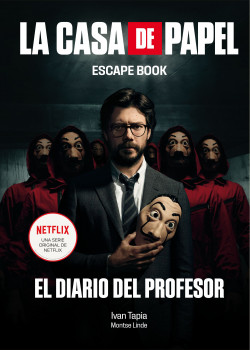 The international phenomenon of escape books now in the thrilling style of Money Heist.

Sergio Marquina, better known as the Professor, leader of the biggest robbery in the history of Spain, spent a part of his childhood and adolescence at the hospital. There he made friends with Jero Lamarca, a boy who, like him, learned to accumulate dreams from the bed.

Life wanted them to follow different paths, and they could not even say goodbye to each other, but the ties between them were indestructible. They have never heard from each other again, although Jero has never doubted the solid and profound nature of that friendship.

It has been a while since the robbery that took place at the Royal Mint. Today, while Jero collects the few things that remain in the motorcycle workshop that is forced to close, he receives a package without a return address. Inside, an unsigned letter, a notebook, a locked box with a padlock, a picture of a mask with the face of Dalí and a red paper bow tie.

Jero has no doubts. Out there, Sergio Marquina has left a hidden part of the loot, a new opportunity. He just has to unravel the clues to find it.

Other titles of the authors